You are a parent, and love your child more than life itself. Everything else is secondary to the welfare of your offspring, so you do the right thing, and trust the advice of your doctor. If you don’t follow the latest regime of AMA mandated vaccines your child will fall victim to any number of predatory microbes, your physician ominously warns. Why would any responsible and caring parent not avail their child to the marvels of ‘science-based’ medicine?

In 1978 my wife and I were anticipating our first-born, and I was working in the field of emergency medical services. After my pre-med studies I was intrigued to learn of a new certification program offered by Stanford Medical School. They promised to bring a new breed of elite paramedics to the streets of America, so the ER could now come to you in times of dire need. It was sensationalized in the press, and became the subject of the most popular TV show of the day, Rescue 51 (yours truly is 2nd from the right in the image below next to the main characters of the show, ‘Gage & DeSoto’). I was accepted, and spent the next several years working as a Paramedic-Firefighter … but, I digress. 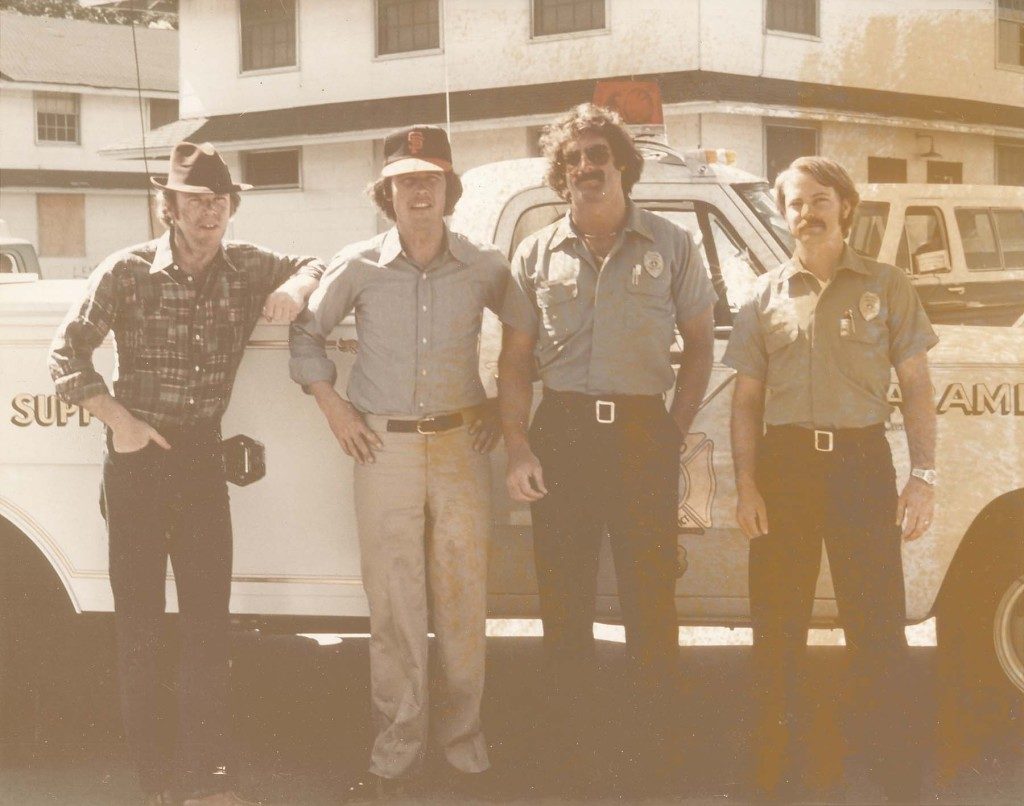 It was during that time I decided to give Chiropractic a try to hopefully heal a persistent sports injury. While in the doctor’s waiting room, in curious anticipation of this initial foray into the mysterious world of ‘alternative medicine’, a book on the adjacent table caught my eye; Confessions of a Medical Heretic by M.D. Robert S. Mendelsohn.

COULD THIS BE TRUE?
The information was stunning, especially his disdain for the hospital birthing and vaccination practices within mainstream medicine. I would have normally blown it off, but these were the words of a respected medical doctor, with years of practice within a prestigious medical institution. Could any of this possibly be true?

Page after page of revelation left me considerably disturbed, as the birth of my son was just a few short months away. I was thrown into a moral dilemma; there was previously no question that we would vaccinate, and follow accepted medical protocols to the ‘T’. What if I vaccinated, and my child were to be harmed? What if I didn’t vaccinate, and he contracted a deadly ‘disease’ that could have been prevented? How could I ever forgive myself if either were to occur? I experienced first-hand the angst responsible, caring parents are facing today amidst the escalation of pro-vaccine propaganda, draconian legislation and the demonization of medical heretics.

WORST FEARS REALIZED
Fast forward to the next decade. After deciding to redirect my medical curriculum by attending Naturopathic and Chiropractic College, with additional training in classical German Bio-Terrain and Chinese Medicine, I opened my first private integrative medical practice. One day a young couple entered my exam room, with their child between one and two years of age. As a young parent myself, what I witnessed was absolutely heartbreaking. The mother and father broke into tears, as they described the demise of their child’s health and cognitive function immediately after vaccinating. As if this were not tragic enough, they were met with months of denials from their obstetrician, while no insightful support was offered to slow the continuing decline of a once bright and energetic toddler. They prayed in desperation that I might have some answers. Most unfortunate, this would only be the first of many such patients I would care for in the years ahead.

The vaccine issue became very personal! Thankfully, we declined to vaccinate our own children, and delivered them both at home, but I was now subjected to this sorrowful reality at the expense of other people’s children. Parents lacking the skills and education required to make an informed medical decision, place their children in jeopardy through no fault of their own. I am not suggesting that well-intended medical professionals do not care about your family, but they are also victimized by a deliberately restricted scope of study, while severe sanctions await those who deviate. I have found it curious, however, that many of my conventionally trained colleagues over the years quietly pass on vaccines for their own children. The fact that the hierarchy of the pharmaceutical industry knows exactly what they are doing is undeniable, while directing and funding the research and educational arms of all medical institutions.

An exponentially growing body of statistical data, and disclosure bears witness to the carnage of this barbarism, so I’ll mention some links at the end of this post to substantiate my position. There’s no need for me to repeat what so many committed individuals, with forensic skills beyond my own are continual making available within their own venues. I am a clinician, and it’s a full time endeavor. What I would like to offer beyond my ample, but anecdotal experience are some salient points for your consideration. Each will receive expanded discussion as individual topics for writings on this blog in the months ahead:

IMMUNIZATION IS NOT VACCINATION
A glaringly absent talking point in the vaccine controversy is the distinction between immunization verses vaccination. Antecedent to current vaccine policies epidemiologist worldwide practiced bio-terrain protocols aligned with a more advanced understanding of physiology and microbiology to successfully cultivate and strengthen the innate attributes of the immune system.

In contrast, vaccinations utilize toxic agents, foreign DNA, synthetics and attenuated biological forms to force an unnatural reaction from a fragile system in its development stage. These substances weaken immunity, while dramatically increasing the incidence of the many chronic degenerative diseases now epidemic that were once considered rare. We’ll introduce you to the proper entrainment of a young and impressionable defense system that is enduring without these inherent risks.

WHAT IS THE TRUE ROLE OF MICROBES IN THE HUMAN ECOSYSTEM?
Would it seem silly to blame maggots feeding off a dead carcass in the forest for killing the animal? Likewise, microorganisms found at the scene of the crime of an illness are often circumstantially accused as the cause. Microbes routinely cycle through phases of morphological changes depending on what function they are fulfilling at any particular time in a naturally occurring ecosystem …. just like our larvae to fly and back again scenario above. The symptoms they produce are an integral component of the healing response. Would it surprise you to learn that many of the microscopic pathogens that we dread already live inside of us in their seed form, and are triggered to a higher valence (form) to provide a critical healing function?

When understood properly, measures can be implemented to expedite the process, mitigate symptoms and avoid chronicity or an escalation to dangerous levels. Such practices leave the individual with an elevation in systemic health, while decreasing the likelihood of similar biological responses occurring at any future time. An unfortunate development are the engineered microbes, and agents that have been weaponized at the expense of humanity; a different topic altogether, but it is a very sad reality and many of these elements are in vaccines!

WHAT IS DISEASE REALLY?
Naturopaths and similar holistic practitioners are largely practicing green allopathy. That is, non-toxic remedies, and modalities favored for reinstating balance are used to counter a ‘disease’ or otherwise perceived problem. This is a gigantic leap in the right direction, but we’re still in the same superstition of materialism box, as coined by Deepak Chopra. I use similar techniques, but only adjunctive to the core work of bringing a greater awareness to those forces responsible for the necessity of a biological reset (‘disease’) in the first place. Physical signs and symptoms are a literal road map to what really ails us, and the 100% effective antidote is awareness. When we come to grips with the genuine purpose of ‘disease’ it will no longer be necessary, and humanity will be catapulted to the next and final Renaissance on this planet.

IS CONVENTIONAL MEDICINE TRULY FOUNDED ON SCIENCE?
This is the question that begs asking, and the quick answer is absolutely not! This topic is so vast that it will be the subject we’ll revisit most often. Science as we know it today fits every criteria to place it squarely in the category of religion. Technology utilizes one-half of the universal equation, which is why much of what we enjoy contemporaneously is unsustainable if not outright destructive to our environment and all life within it. Moreover, aside from the conveniences of the current techno culture, our gadgetry has become a huge distraction and impediment to the inevitable consciousness revolution, as we often mistake it for a complete science.

I presently enjoy reading CAT scans, and availing myself to the machinery of conventional diagnostics to afford a narrow glimpse into a particular level of activity. Simple in-house labs and microscopy presently not taught to medical students can be infinitely more revealing on a functional level, and we’ll be visiting some of those topics.

Authentic Science has been avoided at all cost by the social engineers of this world, as it would greatly upset the balance of power presently in the favorable direction of a relative handful of families on this planet. The seemingly insurmountable chasm restricting our ability to grasp the most basic principles that would set us free has been deliberately contrived. For the conventionally trained, the true nature of our universe will only become apparent when much of what they believe to be true is unlearned … and the same goes for you! Be of good cheer, however; the luminary Walter Russell stated that it is much easier for one with a 4th grade education to understand universal workings than those with an ‘advanced’ education.

IS THERE A MORE SINISTER OBJECTIVE BEHIND THE VACCINATION AGENDA?
I will again defer you to the links below for a less cursory examination into this immensely dark abyss, so I’ll just mention three areas for you to ponder, then let you connect the dots: (1) Retroviral mediums are presently used within the field of genetic engineering (gene-splicing); these same agents have been identified within many vaccines. (2) Animal and insect DNA from many diverse species are present within many vaccines; this foreign DNA is now present in much of the human gene pool. (3) Foreign DNA will be rejected by the human immune system unless immunity is suppressed; vaccines contain immuno-suppressive agents. Any questions?

The final question I have for the herd immunity cult is this: if your vaccines are so darn effective then why do you care if others choose to vaccinate or not, when you are allegedly ‘protected’? Before reciting the litany of classic vaccine propaganda about the eradication of smallpox, and other unfounded claims debunked by epidemiologists worldwide only one thing is now for certain. Vaccines cause disease and death, while compromising both individual and herd immunity. Just follow the money, and you’ll find everything you need to know.

“The only safe vaccine is a vaccine that is never used”
~ James R. Shannon, National Institute of Health

INSTAGRAM tag us #avrevolution
This week on Alfacast: An in-house discussion expl

This week on Alfacast: Christopher Gardner is our

Who’s going to the Greater Reset next week in Au

This week on Alfacast: Reclaim your Life through B