In stock (can be backordered)

Try just one serving, and you’ll understand why Alfa Vedic’s Life Force Protein is too good for health food store shelves. Well beyond a mere ‘protein supplement’, each helping delivers generous portions of the most expensive ingredients artfully complexed to deliver the full range of amino acids and attributes unique to each of the 8 formulations in this product line.

IN USE FOR AT LEAST 2500 YEARS THIS STAPLE OF AYURVEDIC MEDICINE IS CHARACTERIZED AS A “RASAYANA” FOR ITS ABILITY TO SUPPORT BOTH PHYSICAL AND MENTAL HEALTH. “INDIAN GINSENG”, AS IT IS COMMONLY CALLED, IS A POWERFUL ADAPTOGEN TO PROTECT AGAINST ENVIRONMENTAL CONTAMINANTS AND MITIGATE THE EFFECTS OF AGING WITH NEURO-PROTECTIVE, THYROID-MODULATING & ANTI-DEPRESSANT EFFECTS. RESEARCH FINDINGS HAVE PARTICULARLY NOTED SIGNIFICANT BENEFITS TO THE ENDOCRINE & REPRODUCTIVE SYSTEM.

MACA WAS FIRST NOTICED IN ITS NATIVE PERU WHEN LIVESTOCK GRAZING ON THIS ROOT WERE OBSERVED TO BE SIGNIFICANTLY STRONGER, HEALTHIER & VIRILE THAN THEIR COUNTERPARTS. LOCAL INHABITANTS CONSIDERED THIS ROOT AS A POWERFUL APHRODISIAC, WHILE RECENT RESEARCH NOTES ITS HIGH NUTRIENT, ANTIOXIDANT AND PHYTO-ELEMENT CONTENT AS A POTENT ADAPTOGEN. RECOGNIZED HEALTH BENEFITS INCLUDE ITS STIMULATING/BALANCING EFFECTS IN BOTH FEMALE AND MALE HORMONE PRODUCTION WHILE LENDING CONSIDERABLE MITIGATING SUPPORT TO SYMPTOMS ASSOCIATED WITH MENSTRUAL CYCLE IMBALANCES, MENOPAUSE & PROSTATIC HYPERTROPHY IN MEN. ATHLETES FIND IT PARTICULARLY USEFUL IN INCREASING STAMINA, ENHANCING LEAN MUSCLE GAINS AND REDUCING TRAINING RECOVERY TIME.

The foundational core of our Mineral Whey Immunity Blend is a mineral/electrolyte concentrate sourced from grass-fed goat milk whey. Processed at low temperature to preserve nutritional value it provides digestive support and alkalizing effects, while delivering over 20 naturally occurring minerals & electrolytes including potassium, magnesium, and calcium in an exceedingly digestible form form.

Bioactive Colostrum™ is the perfect single-ingredient source for body-building nutrition and immune-boosting elements. Nature’s perfect food for athletes and meeting the extraordinary demands of contemporary life.

Many athletes and health enthusiasts now consider coconut water as the perfect beverage for restoring hydration and replenishing electrolytes lost during exercise. Electrolytes are minerals key to critical bodily functions including the maintenance of proper fluid balance.

The lo-carb/calorie content and naturally sweet taste of dehydrated coconut water are an added bonus of this functional ingredient to round out our Mineral Whey protein. You’ll enjoy the naturally delicious flavor in your favorite blender drink or by the spoonful right out of the bag.

“To understand the intention of Life Force Protein No.5 – Female Essence it’s necessary to remember that the Yin-Yang forces are operative in both sexes at all times. This formula addresses hormonal health by focusing on the entire physiological network at play when the female-male axis is disrupted by the many stressors that now affect us all.

Unlike most commercial herbal formulas designed to relieve menstrual and menopause issues or enhance libido
in the short term, ‘Female Essence’ targets long-term health in both sexes to include improved sexual vigor. The herbal components are carefully selected to this end, and complexed within a larger nutrient synergy to feed the entire spectrum of endocrine function. My goal always, is to promote the balance required for well-being and longevity 1st, and thus avoid the consequences of herbal burnout that results when herbology and nutrition are employed from an allopathic mindset.

Female Essence is perfect for those seeking hormonal-nutritional support as a stand-alone, or as a booster to the higher protein Plant-Based Performance or Performance Whey formulas.” 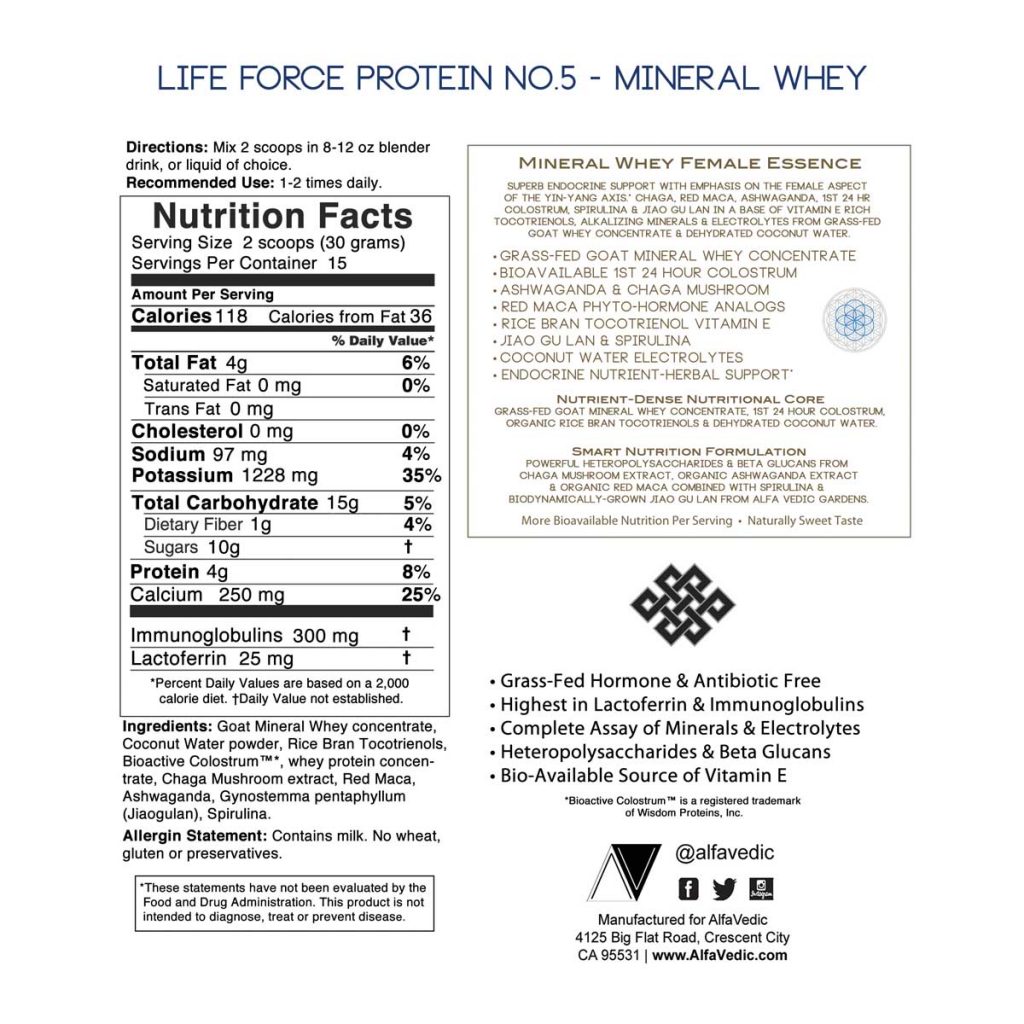 Grass-Fed Bioactive Colostrum™: Created to best maintain all original regenerative and immune enhancing native components. It is minimally processed to avoid damaging the full range of the original proteins and active peptides.

FUNCTIONAL ENHANCEMENTS
Organic Chaga Mushroom: Chaga is regarded as the most powerful, and desirable mycellium on earth for its benefits to the entire body. Siberians drink it daily, and observe chaga drinkers living significantly longer on average. The immense power and energy of wild chaga is due to its abundant content of enzymes, Beta-D-Glucans, SOD, peroxidase, and nucleases, sterols, phenols, B vitamins, minerals, antioxidants giving evidence to its reported benefits to protect against DNA damage from radiation, while lending support to the immune system.
Organaic Ashwaganda Extract: Harvested ethically from pristine British Columbian pine forests.

Organic Red Maca: Commonly referred to as Peruvian ginseng, and consumed by indigenous people of the Andes for centuries as an energy tonic. It is recognized useful for a diverse range of conditions with general health benefits, but especially noted as the premier remedy for impotence and sexual insufficiency with aphrodisiac attributes. Studies reveal positve effects of regular maca consumption to women’s may include improved sexual function and fertility, decreased menopause symptoms, elevated mood and energy, and increased bone density.

Organic Ashwaganda Extract: Also known as “Indian ginseng,” this herb has been a staple of Ayurvedic medicine for over 3000 years. Its wide range of action has earned Ashwagandha the distinction as a primary rejuvenation and reproductive tonic within longevity medicine that promotes physical and mental health, while inhibiting anxiety and improving energy. This full spectrum extract energizes the nervous system, modulates the immune system, and increases super oxide dismutase (SOD), catalase and glutathione peroxidase to combat oxidative stress as noted in an Indian university study.

Organic Spirulina: Spirulina has been consumed for thousands of years do to its nutrient dense and health promoting qualities. Studies reveal its ability to improve muscle strength and endurance in addition to other benefits including blood sugar regulation, anemia prevention, regulation of blood pressure and cholesterol, and anti-cancer properties.

1. Add 1-2 scoops to 4-8 oz water or juice in a shaker bottle, or
2. Add 1-2 scoops to your favorite nutrition shake recipe in a personal blender, or
3. Do what we do, and eat it by the spoonful direct from the bag … it tastes that good!

Be advised! Due to current supply chain and postal service issues, we have unperceived delays on your orders. Thanks for your understanding. Dismiss